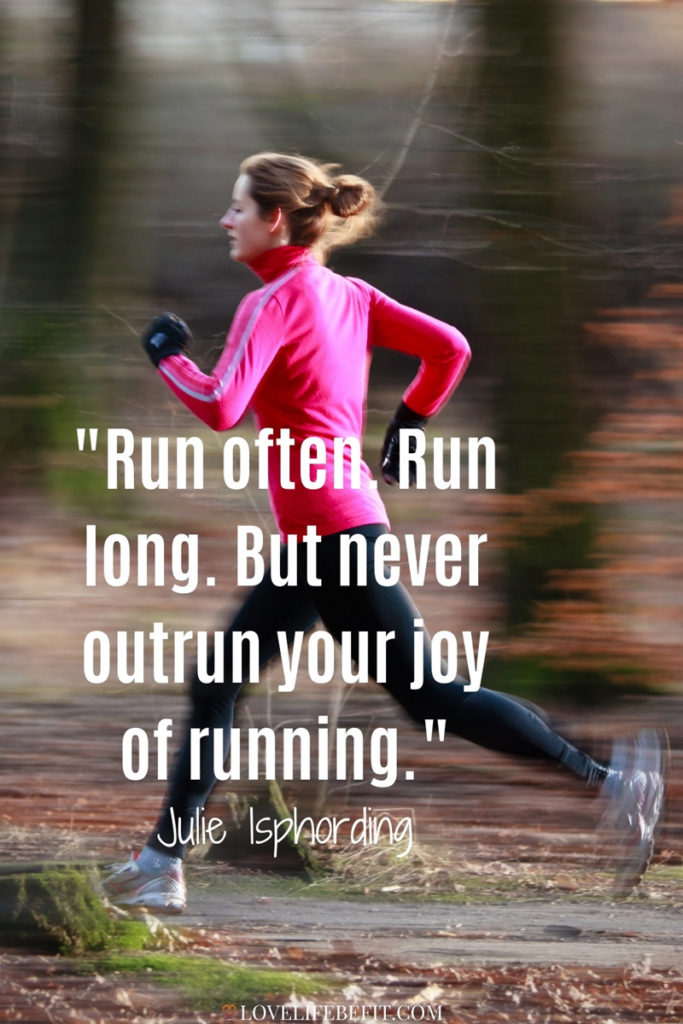 Even the most committed runners need a little inspiration from time to time and these motivational running quotes are here to help! They’re a great way of inspiring your running on a bad day.

I find I always have a love-hate relationship with running. Once I’m out the door and warmed up I love it, but when it’s lashing with rain outside or I’m still feeling my last training session I need a little help with my running motivation.

I think that’s normal! Running can be hard – especially if you’re a beginner runner, or returning from injury. Sometimes we just need a little push to be inspired to run! Running doesn’t just change your body, it changes your outlook on life.

When you’ve been running as long as I have it certainly helps to take a look at what motivated me to start running in the first place. What made a good day! Recapture the zeal and inspiration of the new runner!

Here are some of my favorite motivational quotes for running.

Not everyone loves leaving their warm beds to head out for a run. It can be fine on a beautiful summer morning, but it takes a little more motivation in the depth of winter.

Sometimes it’s just convincing yourself, yes you can squeeze in a quick run before work – there is time. You don’t really need a leisurely breakfast scrolling through social media.

Finding the motivation to run in the morning means you’re set up for the rest of the day. It’s a good way of getting out running when you don’t have much time. Bask in the glow of knowing whatever else happens you’ve managed one big achievement.

Pin these motivational running quotes next to your bed and be inspired to run in the morning!

If you’re a busy person it’s sometimes just easier to run in the mornings. If you’re too busy to run at all – something needs fixing!

My feeling is that any day I’m too busy to run is a day that I am too busy.

If this quote doesn’t get you out of bed in the morning nothing will!

Quotes From Runners To Persevere

When you’re starting out as a runner, running can seem hard! It’s difficult to persevere at running and far easier to come up with excuses why you don’t need to run today. Fight that voice in your head telling you you’re too tired, too old… These quotes will help you lace up your running shoes and go!

The greatest runs don’t happen when you take the easy path. Push yourself out of your comfort zone and make sure you have a good workout. everyone can become a better runner.

I often hear someone say I’m not a real runner. We are all runners, some just run faster than others. I never met a fake runner.

If you want to become the best runner you can be, start now. Don’t spend the rest of your life wondering if you can do it.

Don’t dream of winning, train for it!

Eventually you learn that the competition is against the little voice inside you that wants you to quit.

Long distance running is 90 percent mental and the other half is physical.

Relish the bad training runs. Without them, it’s difficult to recognize, much less appreciate, the good ones.

These next two quotes come from running heroes who died far too young. Gabe Grunewald, one of America’s best middle-distance runners who died from cancer, (age 32), and Steve Prefontaine who’s been called the greatest American distance runner in history who died in the ’70s, age just 24.

They may have lived short lives but they both live on in memories providing inspiration for future generations of runners.

It’s okay to struggle. It’s not okay to give up.

I’ve given myself a thousand reasons to keep running, but it always comes back to self-satisfaction.

Everyone knows Oprah has struggled with her weight over the years. Famously she trained for and ran the 1994 Marine Corps Marathon. She finished in an amazing time of 4:29 for a new runner and her weight loss was legendary. Here’s her quote:

Running is the greatest metaphor for life because you get out of it what you put into it.

Whatever you do – don’t give up!

Runners just do it – they run for the finish line even if someone else has reached it first.

People don’t become great runners overnight. Behind every success story is a history of small hard-won improvements. Take inspiration from these motivational quotes to stick to those training plans and dig deep!

We run, not because we think it is doing us good, but because we enjoy it and cannot help ourselves…The more restricted our society and work become, the more necessary it will be to find some outlet for this craving for freedom. No one can say, ‘You must not run faster than this, or jump higher than that.’ The human spirit is indomitable.

If it doesn’t challenge you it won’t change you.

Only those who risk going too far can possibly find out how far one can go.

The man who moves a mountain begins by carrying away small stones.

Runners are made when no one else is watching.

Ask yourself: ‘Can I give more?’ – the answer is usually YES.

We all have dreams. But in order to make dreams come into reality, it takes an awful lot of determination, dedication, self-discipline, and effort.

If you’re new to running, you’re about to make a big discovery. Running isn’t just a sport or a way to exercise. It pushes you, challenges you, nurtures you, and can make day-to-day problems seem insignificant. As the funny running quote goes: “I run because punching people is frowned upon”.

I don’t know who said it first, but in modern life, we all need an outlet for our frustrations. Certainly going for a run makes me a better person.

Skeptical about how much running can change lives? Watch the Skid Row Marathon documentary. A criminal court judge in LA’s notorious skid row starts training a group of addicts and former criminals to run marathons. For many of these new runners, it’s life-changing.

Here are some of my favorite running quotes about life:

Running is alone time that lets my brain unspool the tangles that build up over days.

When you run the road belongs to you.

Running allows me to set my mind free. Nothing seems impossible, nothing unattainable.

Running is therapy anyone can afford.

I always loved running…it was something you could do by yourself, and under your own power. You could go in any direction, fast or slow as you wanted, fighting the wind if you felt like it, seeking out new sights just on the strength of your feet and the courage of your lungs.

Running has taught me, perhaps more than anything else, that there’s no need to fear starting lines or other new beginnings.

If you don’t have answers to your problems after a four-hour run, you ain’t getting them.

A good laugh and a long run are the two best cures for anything.

Running isn’t just for young people. It’s a shame that some people retire from running as they get older. Running helps people stay young in heart, mind, and body. These are some favorite motivational quotes for older runners:

Most runners hope running will always be a part of their lives.

I’ll be happy if running and I can grow old together.

Someday you won’t be able to do this. Today is not the day.

Sometimes we all need a little pep talk before a big race! I like to pin a few motivational running quotes around the house in the lead-up to the big day. Running well in a race is only partly about fitness and training. So much about how well you run in a race depends on what’s going on in your head.

Here are some favorite running quotes to keep the demons away!

The voice inside your head that says you can’t do this is a liar.

A lot of people run a race to see who’s the fastest. I run to see who has the most guts.

Run like hell and get the agony over with.

Most people never run far enough on their first wind to find out they’ve got a second.

Nothing, not even pain lasts forever.

But I also realize that winning doesn’t always mean getting first place; it means getting the best out of yourself.

Everyone in life is looking for a certain rush. Racing is where I get mine.

Run when you can, walk if you have to, crawl if you must; just never give up.

The reason we race isn’t so much to beat each other… but to be with each other.

There is magic in misery. Just ask any runner.

The real purpose of running isn’t to win a race. It’s to test the limits of the human heart.

If you are losing faith in human nature, go out and watch a marathon.

Running Quotes For The Joy Of Running

In the words of Dr. Seuss, “It’s fun to have fun, but you have to know how”. Don’t lose sight of the joy of running.

Running is about exploring your capabilities. It should be an adventure, not a chore.

Never limit where running can take you. I mean that geographically, spiritually, and of course, physically.

Children run everywhere for a reason – it’s fun. Grown-ups can forget that sometimes.

And finally, my favorite running mantra.

If you’ve enjoyed these motivational running quotes you may also like my tips for running motivation.