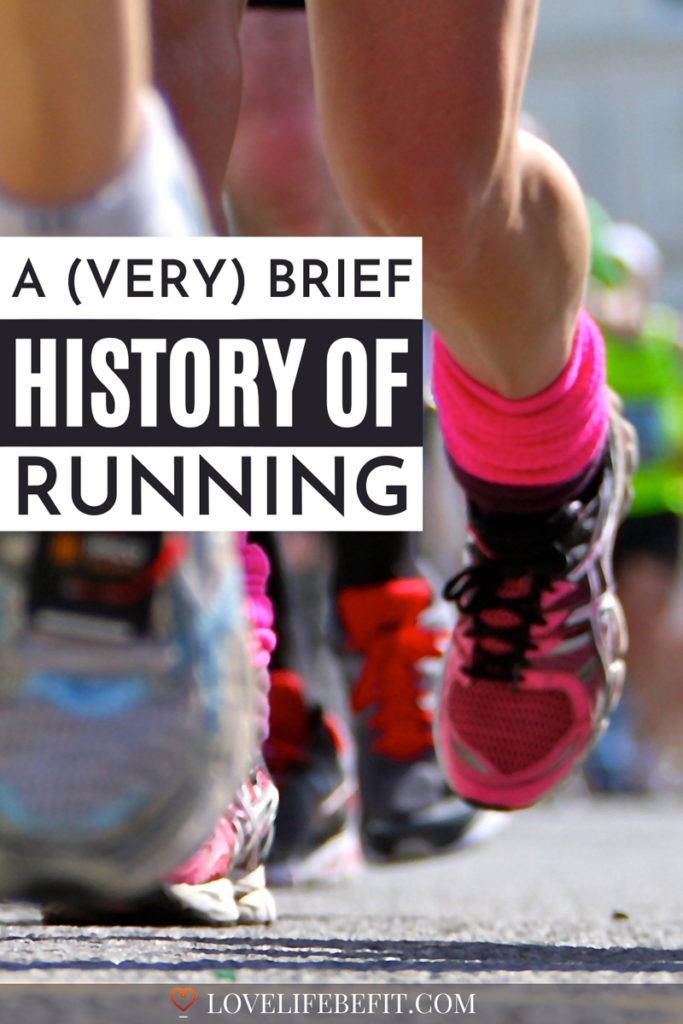 I love this type of question. It’s a chance to dig into our ancestral past and ruminate about some of the running greats. Wax lyrical about those pillars of running who’ve shaped our sport from Pheidippides to Usain Bolt. Okay, the truth. Mainly I love it because typing “When was running invented?” into a search engine gives you some crazy results.

Top of the list is the Thomas Running meme.

“Running was invented in 1612 by Thomas Running when he tried to walk twice at the same time”.

Thanks to the power of Quora and Twitter this is the internet’s accepted version of when was running invented!

Better intended, but equally misleading, is the answer to the question “Who is the person who invented running?”

Based on the cover story for Outside magazine, a quick search will tell you it’s Frank Shorter for his 2 hours, 12 minutes, and 20 seconds Olympic marathon win in 1972 for the United States. Caught up in the excitement of the win, the magazine got a little bit carried away.

This post contains affiliate links. This means I receive a commission if you make a purchase through my links, but this is at no additional cost to you. Please read my disclaimer for more information.

When we crawled out of the swamp and spotted a dinosaur eyeing us up for lunch, I’m sure running came naturally. We didn’t need to invent it.

Okay I’ve probably mixed up a few timelines here. I did try searching the internet for an answer but apparently humans and dinosaurs did exist at the same time in Jurassic Park. Who would have believed it!

Most animals can run and early humans were no exception. When ancient humans evolved from primates some 2 million+ years ago you can bet that running to escape from predators was second nature.

Less obvious is the theory that early humans ran down their prey. It’s an idea called persistence hunting. I’d love to believe it. I’m an ultra-runner! This idea completely justifies why it seems natural to spend hours and hours running.

Let’s just explain what persistence hunting is all about.

It’s a theory built around sweat proposed by David Carrier in 1984 and developed further by Daniel Lieberman. Yes really. Humans are very sweaty animals. We’re one of the few mammals who cool themselves by sweating. (Horses, apes, and hippos also sweat to some extent, but on the sweating league tables we’ve aced it).

Sweating is a really efficient way to cool down. To add to that, Lieberman noted, we have elongated Achilles tendons, short toes, and arched feet – all perfectly designed for running long distances.

Most mammals pant to cool down and they have furry or woolly skins. They may be faster than humans over short distances, but the theory is humans hunted their prey for hours until the exhausted animal collapsed. Our ancestors’ super cooling system and unique biomechanics allowed us to keep on running.

I really want to believe all our ancestors were persistence hunters. Certainly, there are still a few people hunting this way in the Kalahari Desert:

These people are amazing – if only I had half their stamina! Christopher McDougall took up the theory in his best-selling book, “Born To Run”, where he describes the incredible running prowess of the Tarahumara Indians. It’s the bible of endurance runners and not easily criticized.

Why would a runner dish such a neat theory?

It pains me to point this out but there are a few chinks in the theory. Could our ancestors track animals through woodlands where footprints would be harder to follow? Pickering and Bunn point out it’s very unlikely. It would certainly be less effort to hide in a tree with a sharp rock…waiting for your prey to pass by.

So When Was Endurance Running Invented?

In ancient societies, roads were practically nonexistent and most people got about on foot. If you wanted to send messages over a great distance, the most logical way was to send a runner.

The most famous messenger runner was the Greek soldier Pheidippides, (530-490 BC). Legend has it he ran about 25 miles from Marathon to Athens to deliver news of the victory of the battle of marathon, dropping dead after he delivered his message. It was the birth of the first marathon.

But probably not true. There was a smooth road between Marathon and Athens and it would have made a lot more sense to send a horse with the triumphant message.

It’s likely Pheidippides did exist. The Ancient Greek historian Herodotus writes about a messenger Pheidippides running from Athens to Sparta to ask for help against Persian invaders in the coastal town of Marathon. The Sparta troops couldn’t leave immediately – they had to wait until the next full moon for religious reasons. Pheidippides ran back with the bad news.

It was a round trip of 280 miles over mountainous terrain, too steep for horses, and took him 4 or 5 days. Not an unusual feat for Greek messengers.

It’s safe to say that most ancient societies used runners as messengers, from the Greeks to the Inca Chaskis in the 15th Century. Two feet are a lot easier on steep terrain than horseback, so the first endurance runners were trail runners!

When Was Running Invented As A Sport?

I’m guessing this is what you meant when you searched for “When was running invented”. It’s a good question but almost impossible to answer. The first running events were held so long ago there are very few records.

Sprinting events along the length of the stadium were held in the original Olympic Games starting in 776BC. These events, in honor of the god Zeus, were organized by the ancient Greeks but continued under Roman rule, until emperor Theodosius I banned all pagan ceremonies in AD394.

These sprint races of approximately 180m are the first recorded events of their kind but I doubt they were the first.

The Olympics restarted in its modern form in 1896, kicking off with the first marathon race. It was held along the route of the mythical run by Pheidippides from Marathon to Athens. The distance was 40,000 meters, (24.85 miles).

For the next few Olympic games the marathon race varied in length. It was approximately 24 to 26 miles. As all competitors covered the same route, there was no pressing need to fix the distance.

Then in 1908, for the London Olympics, the designated course from Windsor Castle to White City Stadium of about 26 miles was extended by an extra 385 yards to finish in front of the Royal Box. Eventually, after 13 years of wrangling, this distance of 26 miles and 385 yards was finally adopted as the official marathon distance.

Aside from the Olympics, King Taharka of Egypt made his soldiers race over a 100 km course to keep fit. This was back in 690 to 695BC and must count as the first recorded ultra race.

The first reference to a hill race, (mountain race), is in Scotland in the 11th Century when Malcolm Canmore held the first gathering at Braemar. The race was from Braemar to the top of Craig Croinich and back. Not only was honor at stake but the winner won a hefty prize of a purse of gold and a fine sword.

When Running Was Invented – Conclusion

Running is so wired into our DNA I really doubt these recorded races were the first of their kind. Humans are competitive and I can imagine most cultures holding races to show off their athletic prowess.

Being strong and fit was essential in a world without motorized transport. Plus races and games were a good way to signal superiority to your enemies!

Running is natural for humans – just watch children playing. Whether you believe we evolved as persistence hunters or not, our bodies are certainly very efficient running machines.

I’d love everyone to be runners. It’s certainly good to see movements such as parkrun helping people rediscover the joy of running. If you want to get involved, parkruns are free to enter 5km timed events held on Saturday mornings around the world in parks and open spaces. Find a local event near you.

When was running invented?

Ignoring funny memes about Thomas Running, the answer is never. Humans, like most animals have a natural instinct to run. It’s hard-wired into our DNA.

When was running invented as a sport?

The oldest records of sprinting events are from the original Olympic Games starting in 776BC organized by the ancient Greeks to honor Zeus.

What is persistence hunting?

Persistence hunting is the theory that our ancestors evolved into efficient running machines to run down prey to the point of exhaustion. It’s a seductive theory but unlikely to be true.