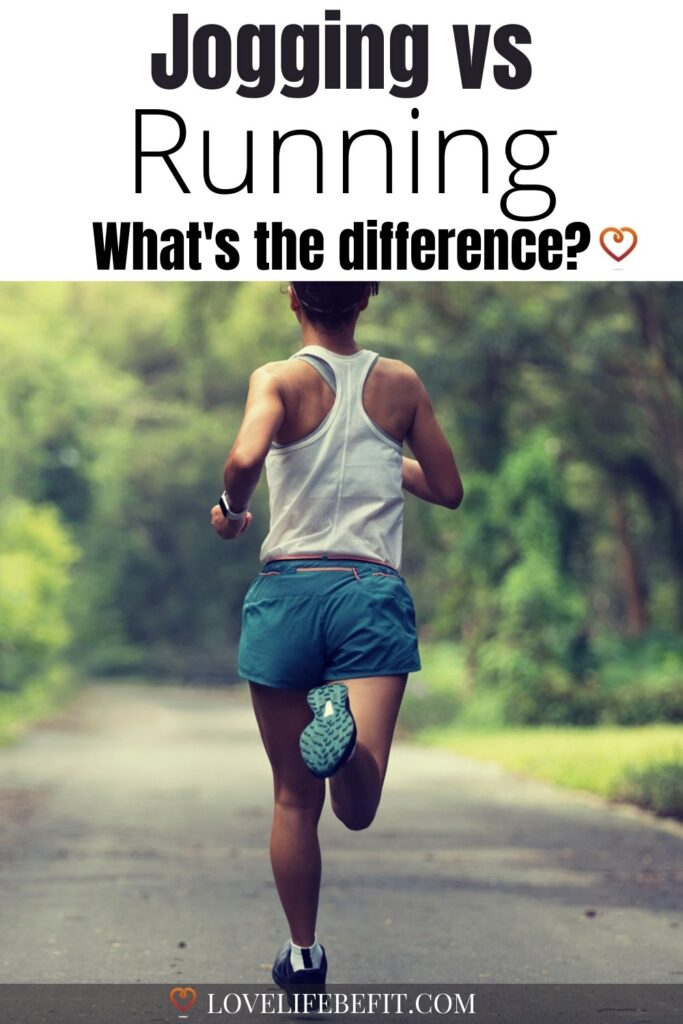 I am a slow runner. I will never be a jogger. Some people think the only difference between jogging vs running is speed. I beg to differ.

Jogging vs running is about mindsets and attitudes. It’s not all about running at a faster pace. It’s about what it really means to you to be a runner.

A Brief History Of Jogging

Ever called someone a jogger? In our house, it’s seen as an insult. That might be a bit strong but you need to look at the history of jogging to understand why.

The term jogging was coined by Arthur Lydiard, a renowned athletics coach in New Zealand. He encouraged retired Olympic athletes to start jogging for health benefits.

If it had remained as an activity for retired Olympic athletes I’m sure most runners would happily call themselves joggers! However, the term was highjacked by Bill Bowerman, a University of Oregon track coach, in his hugely popular book Jogging (1967) written in collaboration with the heart specialist W.E. Harris.

Jogging started the running boom of the ’70s and ’80s. It became hugely popular as a form of aerobic exercise. Modern culture, a little unfairly, portrayed joggers as unfit, infrequent runners decked out in headbands and jogging suits. This image still sticks today.

These days, jogging is defined as running at a slow or leisurely pace. And that’s it. As definitions go it’s really lacking.

By this definition, all slow runners are joggers. But a slow runner may take their running seriously and train hard for races. Physical exertion can be just as tough for runners at the back of a race – they just happen to be slow.

I doubt defining jogging as leisurely running was the original intention of Bowerman. He promoted jogging to the masses as a “physical fitness program for all ages”.

The flyer for the book Jogging is reminiscent of a bygone era but holds true today:

“Jogging can be done by either sex at almost any level of physical fitness or age.

Bowerman pretty much nailed the many health benefits of jogging and running. Back in the ’60s, before the jogging boom, runners were serious athletes. There were no fun runners. Most retired athletes just stopped training.

Inventing jogging encouraged both former athletes and the masses to run at a slower pace, a little more relaxed, with less physical exertion. The focus was on enjoying the activity and better health, particularly better cardiovascular health.

However, even in his book Jogging, Bowerman still drew on his coaching experience – there were training plans that included interval work for beginner runners.

I doubt Bowerman ever expected jogging to just be defined as running at a leisurely pace. Instead, the book was about bringing the health benefits of running to a wider community – people who would never represent their country but could still train and improve at running.

The perceived difference between jogging and running is speed. There are no set rules for what counts as a jogging pace but there’s a widely held belief that a jogging speed is anything slower than 10 mins/mile.

Now if this is an accurate reflection of running pace, most runners tend to run at a pace considered jogging. We’re all joggers!

Plus Strava tends to overestimate speed – it subtracts the time you stop jogging to tie your shoelaces or catch your breath. So in reality, runners are running or jogging at a pace that’s slower than the time recorded on Strava.

Defining jogging as anything slower than 10 mins/mile is just elitist. It’s perfectly okay for beginner runners to run at a pace of 12-15 min/mile – you can still call yourself a runner!

The Main Difference Between Jogging vs Running

Calling yourself a runner or a jogger is really your personal preference. If there is a difference, it’s in attitude and different mindsets. Most runners will discover and enjoy the thrill of racing. They may never win a race but competing makes them part of the wider running community.

For runners, it’s a sport – following a training plan and setting specific goals. Running may take more energy with some training at a higher intensity. The aim for most runners is to improve at running and run at a faster speed or longer distances. There’s more commitment – for example, a marathon runner will follow an intense 16+ week training plan.

A key difference with joggers is they think about running as a physical activity rather than a sport. Their running will be easy runs at a relaxed pace with less effort than a runner trying to improve by following a training schedule. The mile pace for joggers is often well within their capability and they tend to run short distances, for example running up to 5 miles a day.

I’ve come across another misconception researching this article. There’s an idea that running form is different for runners vs joggers.

Of course, if you compare someone running fast with longer strides versus someone running at a slow jogging pace, the running form is going to be different. It doesn’t mean joggers can’t run with proper form or they should have a different running style.

There’s an idea that joggers have more of an up and down movement as they jog. I’m guessing this myth is because they tend to take shorter, choppier strides because they’re running more slowly.

The bounciest runner I’ve ever run with was a former national standard athlete from Boston. She would leave me in her wake. If you watch trained athletes run, their power output and strong muscles propel them greater distances with each stride, but they still go up and down!

Both running and jogging need a proper running technique, otherwise, you’re risking injury. Inexperienced runners and joggers tend to get tired and slouch instead of maintaining an engaged core. When this happens it’s best to stop running or jogging and walk. When you feel able to start again – run properly.

Running and jogging share many health benefits. They train your aerobic energy system – that’s good for your heart health.

Both running and jogging burn calories helping you reach and maintain a healthy weight. If you’re trying to lose body fat and you’re a beginner runner, a slow pace or slow jog can be better – there’s less risk of injury. For some people, if you haven’t exercised in years, it’s best to start with a walking plan before trying the Couch to 5K Program.

Slow-paced running burns fewer calories per mile but it’s best to improve as a runner slowly with less stress on your joints and body. Instead of launching into a fast pace run reminiscent of your cross-country school days, start at an easy pace. You don’t need to run fast for weight loss from running. Even running a shorter distance regularly can make a big difference.

Experienced runners can burn more calories running at a faster pace. Interval training improves your anaerobic energy systems and can even boost your metabolism. The risk factors with faster-paced running are that it can be hard on your body – so build a good base as a beginner runner before working on your speed.

Running and jogging both use the same muscles and are great for building strong bones – this can be really important for older runners.

Jogging may be better for reducing stress – racing adds its own stress levels and requires more mental energy but most runners, as well as joggers, will tell you running is the best stress relief and also helps you sleep well at night.

Both running and jogging are good for you helping you improve your fitness and maintain a healthy weight – with a decreased risk of high cholesterol and chronic diseases.

Life Is Just Better When You Run

Jogging and running make life better in so many ways. Most people find that when they get through the first few weeks of running regularly, they feel so much better – with more energy and enjoyment of life. If you’re struggling to run, these tips will make running feel easier.

Of course, running and jogging are not the only ways to move more and get fitter, but walking, jogging, or running are affordable and accessible for most people.

It doesn’t matter if you think of yourself as a runner or a jogger. By all means, just run for fun and access the numerous health benefits of going for a jog.

If you’re ready to take the next step and think of yourself as a runner, the running community is ready to welcome you. Make plans, sign up for a half marathon, or train to run faster. Age, weight, and gender are never barriers. All you need is the right mindset to be a runner!

Is jogging the same as running?

Yes! Jogging is the same as running. The only real difference is the apprach to running. Runners are normally trying to improve and compete in races. Joggers are normally running purely for health and fitness reasons and often run with less intensity at a more relaxed pace.

Why is jogging better than running?

Jogging or running at a slower pace can be better for beginner runners. You won’t burn as many calories per mile as a faster runner but there’s less stress on your joints and body. If you’re new to running or jogging it’s important to build mileage slowly and build a strong running base before trying to run faster or further.

Is a 10-minute mile running or jogging?