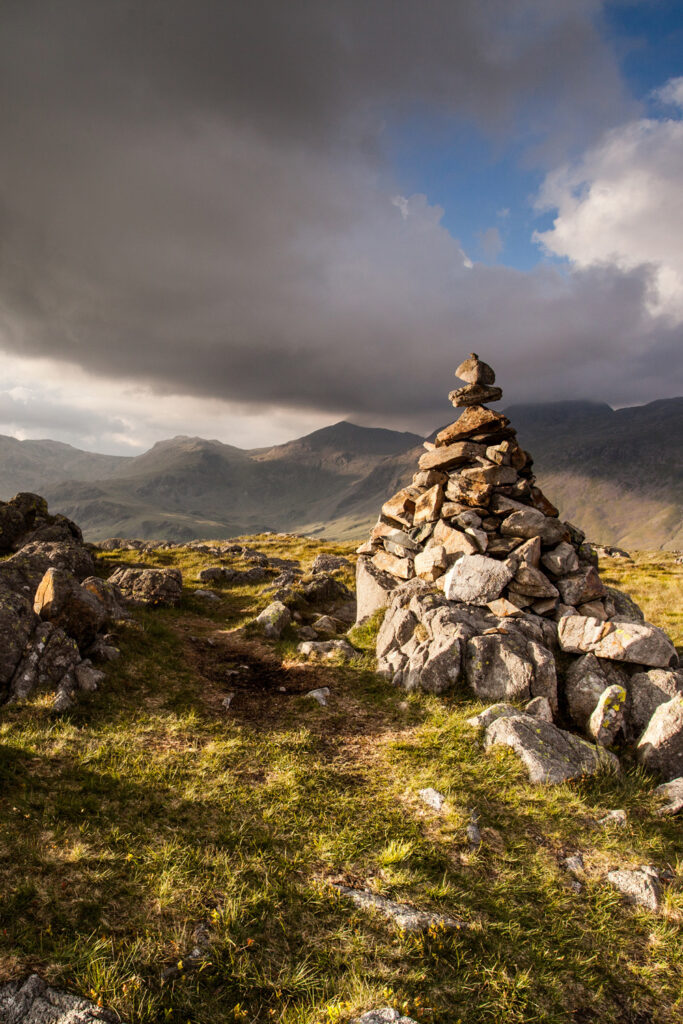 If you’re new to hiking and exploring the national parks you may have wondered about the rock stacks. These piles of stones, best known as cairns, seem to be everywhere! They’re not just random piles of stones, these stacks of rocks have a meaning.

Indigenous people all around the world have left piles of rocks as markers in wilderness areas from high mountains to featureless deserts. Even today, for modern-day hikers, these trail markers are an important navigational aid.

What are stone piles called?

These stone stacks are known by many names; the best-known names are inukshuks, by the Inuit people in North America, and the word cairn from the Scottish Gaelic.

If you’re hiking on trails you should always take a map and compass, (and know how to use them). Find out more about hiking for beginners. But cairns can still be helpful – even if you’re using a GPS. Those heaps of stones are useful for marking trail junctions.

In poor visibility, all too common in the mountains, it’s easy to miss a turning. Cairns marking a descent route can be a lifesaver when you’re descending off mountain tops in bad weather and where getting lost can have serious consequences. Hiking wilderness areas such as Alaska, a cairn can be an important waymarker on the trail.

Unfortunately, when you’re hiking, that heap of stones you find on a trail may not have a purpose. Rock balancing is a popular trend that’s grown via social media. A stack of rocks can be a piece of art, a practice of patience, or even have a spiritual meaning – tapping into your inner zen as you patiently pile rocks one on top of the other. It can be a form of meditation.

I confess I’ve done my own share of rock balancing – it’s hard to resist when you find the perfect rocks!

Andy Goldsworthy creates elaborate art in nature, balancing stones without the use of adhesives, and is often considered the founder of modern-day rock balancing. Some of his creations have inspired my own balancing rock piles – on a much smaller scale!

Artistic stone stacking is nothing new. Native cultures have often created elaborate stone sculptures, balancing stones one on top of the other. Most of these ancient cairns come from religious traditions. The elaborate stone stack of Bárður Snæfellsás in Iceland is a tribute to the half-troll, half-man protector of the Snæfellsnes peninsula.

From burial monuments to stone circles, building rock cairns has been a spiritual practice since ancient times.

These days there’s a lot of controversy around stacking large rocks. Not everyone agrees that rock balancing enhances the natural environment. There is a growing movement of people who think your carefully erected pile of stones is little better than litter.

Even if you build your stone structure with the best of intentions, others may see it as disrespectful to nature. You could still be disturbing endangered species hidden under the rocks.

The historic significance of cairns to local people should never be underestimated. In many places, any damage to a cairn is seen as an act of vandalism.

If you’re tempted to add your own stones to a trail cairn – think twice! It’s best to leave them as you find them.

Bates Cairns built in the Acadia National Park are a great example of the history and controversy around cairns. These iconic rock piles are named after Waldron Bates and date back to the early 20th century.

Used to keep people on the right trail, tourists and hikers have been knocking over the cairns, moving them, or ruining their iconic look by adding extra stones. The local people are trying to conserve the heritage of the stones by educating visitors to the area – hopefully, they’ll get the message and leave the cairns as they find them.

Why You Shouldn’t Build Stone Cairns

Random cairns built on trails just for fun can be really confusing when you’re trying to navigate. A hiker can be led astray off the right track onto more difficult ground.

When a route has too many cairns it’s easy to miss a significant turn – and end up getting lost and disorientated. A cairn should be a navigational aid helping people stay on the correct path.

Well-meaning hikers who add stones to existing cairns may actually be damaging ancient structures or disturbing cultural artifacts and sites. Many people view building cairns on public lands as littering.

Follow the guidelines of the Leave No Trace Center for Outdoor Ethics and leave what you find:

Building rock stacking structures and adding a stone to a cairn as you pass can be tempting. I confess I’ve done it myself at times. But it’s time to think about the consequences – not just people getting lost but the negative impact on the environment. It’s time to respect nature and leave the rocks as we find them. Let’s keep our trails clear for future generations to enjoy.

So now you know the meaning of stacking rocks on a trail. What are your thoughts on stacking stones and building stone cairns? Do you think it’s harmless fun or littering? Let me know in the comments below.

What do stacked rocks symbolize?

What is it called when rocks are stacked?

Stacked rocks are normally called cairns, a word from the Scottish Gaelic. The Inuit people in North America call stacks of rocks inukshuks.

Why is stacking rocks bad?

Some people believe that stone cairns are littering and disturbing stones can be damaging to the environment, destroying endangered species. People stack stones for fun but adding unnecessary stone cairns to a trail can confuse and mislead hikers.

Why do Japanese stack stones?

Stacking large stocks is common in Japanese Zen gardens, which seek to create order out of nature’s seeming chaos.

Why do Buddhists stack rocks?

It’s a gesture of asking for good fortune to be bestowed on the rock stacker and/or their family.

We call trail cairns “ducks” because if you just use a ‘big’ rock first and a Little Rock on top, it looks like a duck!! I have found them helpful on more than one occasion

Love the ducks name! Cairns are very helpful when they're marking the trail properly but sometimes there are so many random ones they leave you doubting your navigation skills!