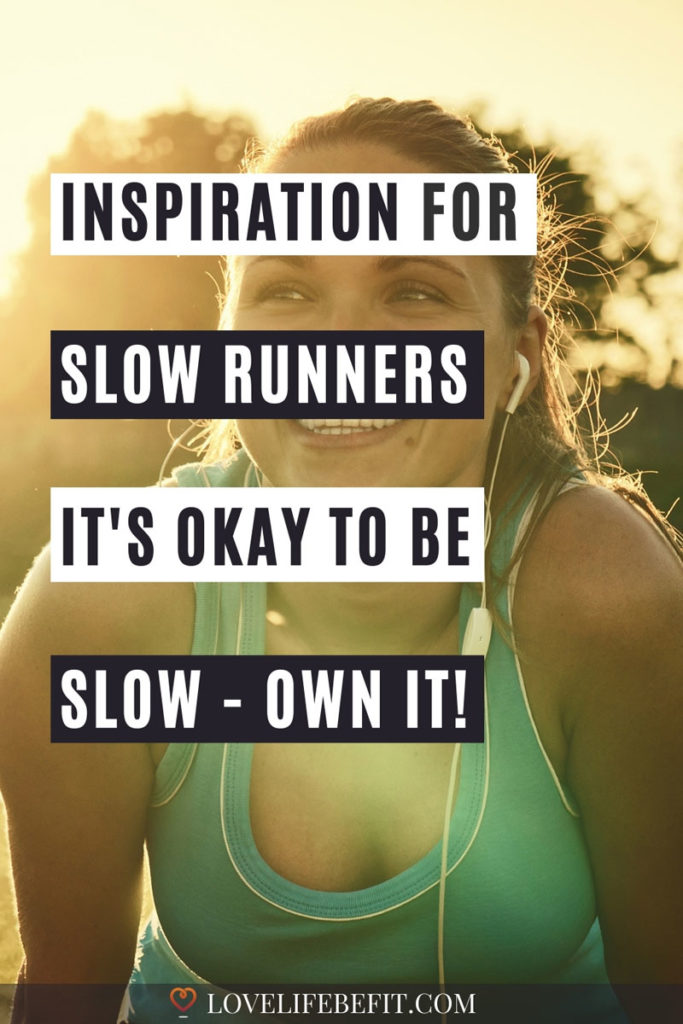 This is my confession: I’m a slow runner. It’s been a gradual realization, but I’m okay with it. The runner I used to be in my twenties no longer exists. Life has taken its toll. I’ve joined the slow runners at the back of the pack.

These days, wearing a T-shirt with “Sleep, Eat, Run, Repeat” on it would be a lie. My body falls apart with intensive training, I have a family to think about, and I now know life exists beyond running.

Yes really! These days most of my runs are slow. They’re about enjoying being outside, clearing my head, and carving out a bit of me time. I love it!

It’s Okay To Be A Slow Runner

Does it feel a bit judgy when you complete a race and someone asks how you got on? It shouldn’t! It’s a natural question to ask and most of the time these people mean well.

Before I tell people my running time, I like to say I’m a slow runner. I’m out to enjoy myself, not win races.

When you’re a slow runner the only person you’re competing against is you! Set your own running goals and they don’t have to be about speed. It can be enjoyment, feeling healthy, or making friends – there are so many reasons for running.

My guy is super competitive. He’s not a runner, (fortunately), and I have a hard time explaining to him that running in a race isn’t all about trying to run fast. That it’s perfectly okay to run at the back of the pack. It doesn’t mean your smile at the finish line isn’t just as big as the runners out in front.

Slow runners may take longer to get around a course, but we’re still running! We’re still getting all the benefits of being a runner. Putting in the effort and clocking up the miles.

It’s often a lot harder being a slow runner. The front runners are often driving home by the time I get to the finish line. Think about all that time on your feet. It takes a massive amount of stamina to be a slow runner!

So What Is A Slow Runner?

There’s no definition of a slow runner. Instead, it’s a mindset. If you’ve taken a break from running, maybe recovering from injury, it can feel really slow when you start running again.

That’s because you’re running slower than your normal pace. Your legs can feel heavy when running until you adjust to training again. Interval training, drills, and hill reps will help you build strength and run faster. Find out more about how to run without getting tired.

Slow Runners Can Still Get Faster

Being a slow runner doesn’t mean you can’t improve and get faster. Everyone can benefit from speedwork sessions, enjoy following training plans, and get a kick out of analyzing their running data.

A slow runner can get faster by working on strength and endurance. These tips and training plan will help you improve your mile time:

I may not rediscover the speed of my twenties, but I can still make improvements, set targets, and hit running goals. My running helps with weight loss and maintenance, helping me to stay in shape. Even on my slowest run days, I’m still running faster than the person sitting on the couch.

Just because you’re a slow runner doesn’t mean you’re not putting in the effort. We all have constraints on our running. These could be body size and shape, age, or the time we have free to spend training.

Slow runners can be training just as hard as any other runners. When you’re putting in the effort don’t beat yourself up about results. If it takes you 80 minutes to run 10K that’s often harder than an elite athlete taking less than 40.

Slow runners are often juggling work, childcare, and a ton of other commitments just to squeeze in a daily run. Be realistic. Running isn’t just about pace.

Age Can Slow Runners Down (But Less Than You Think)

It used to be the view that runners were “has-beens” at 35. Mo Farah destroyed that myth when he won the Chicago marathon at age 35 in 2018. This study by Fair and Kaplan shows running performance only starts to decrease from the age of 40 and it’s a lot less than you think.

Between the ages 40 to 70, expect your performance to decline by just 1% per year. You can use this age-adjusted calculator to work out target times for different ages based on your personal best times under 40.

Some older runners will find they’re running a lot slower than these targets as they age. It’s often down to changes in their body and the type of training they’re able to do.

I know I’m heavier and I choose to spend more time doing the long slow runs I enjoy, instead of the harder, faster runs my body needs to be a fast runner. It’s my choice to be a slow runner.

What Makes Someone A Slow Runner?

A lot of beginner runners are slow. If you haven’t run since you were a child, your body forgets what to do. Yes really!

Running is the most natural of all sports. A young child runs with perfect running form. Yet by the time we’re adults, we’ve spent a lot of time sitting at desks and developed all sorts of muscle imbalances. Often we need to relearn how to run and build muscles to become strong runners.

When you first start running it’s your breathing that’s hard. As you get better at running, muscle strength and endurance hold you back.

Most slow runners are capable of improving and running reasonably fast. It’s just that the type of training it takes to become a faster runner doesn’t fit with everyone’s lifestyle, goals, and choices.

I Am A Slow Runner

Judge me or don’t judge me, but I’m okay with being a slow runner. I’m not making excuses for my running times. It’s my choice. If you’re a slow runner own it. Don’t make excuses…

What is a slow runner?

It’s not possible to define a “slow runner”. It’s all relative. If you’re a fast runner recovering from injury, you’re going to feel slow until you get your fitness back. If you’re a beginner, running at 10 minutes/mile pace can sound really fast. For an elite runner, it’s a very slow running pace. The average running pace for non-competitive runners is 9-10 minutes per mile, but beginner runners are often much slower running 12-15 minutes per mile.

What is the slowest running speed?

Anything slower than 4 miles per mile is really a walking pace. At the slowest running speeds, your running form can start to deteriorate and it is better to walk at a fast pace instead.

Can a slow runner learn to run fast?

Just about all slow runners are capable of running faster. Everyone can benefit from speed training sessions and following training plans. Add intervals, hill reps, and strides into your training to become a faster runner.