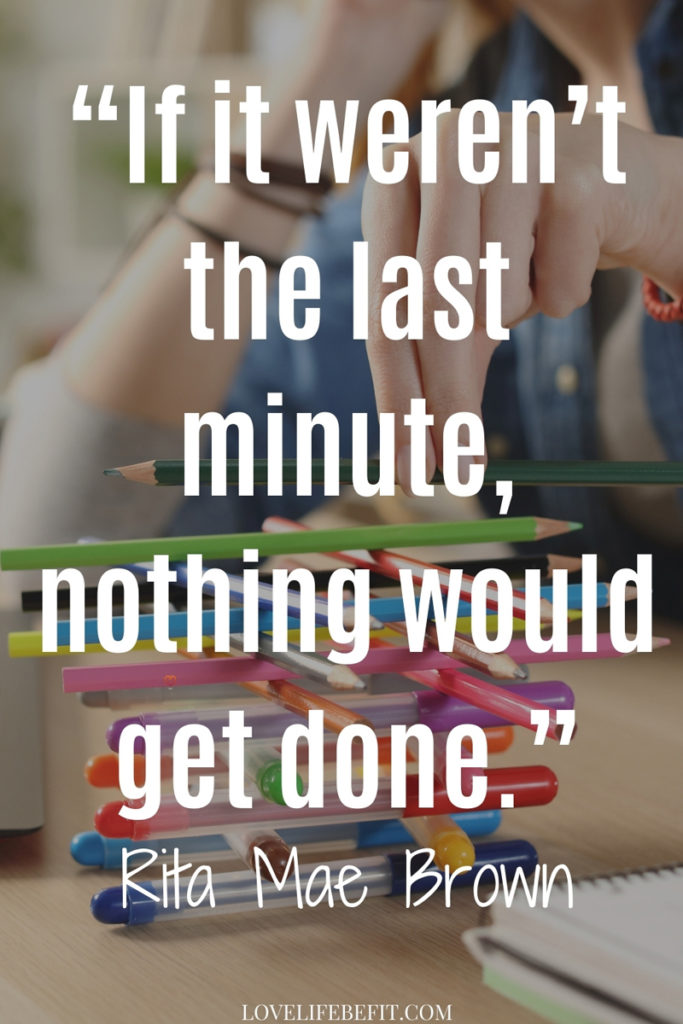 Let me guess… you’re a procrastinator and you’re hoping these funny, helpful, and inspiring quotes about procrastination will help you get on with the task at hand.

I get it. It can be hard to find focus. It’s easier to waste time on distractions. Put off all the things we were going to do today until tomorrow. Tomorrow will be one very busy day!

I’m just as much a connoisseur of procrastination as anyone. Unpleasant tasks left to one side in my inbox. Even important tasks! It takes a deadline such as “due tomorrow” to really get my attention if it’s something I just don’t want to do.

Hopefully, these procrastination quotes will help all of us get through those uncompleted tasks!

These quotes about procrastination are a lot of fun. If you have the bad habit of putting off making life changes for healthy living, important decisions, or essential jobs these funny quotes may spur you into action.

For those who love a Mark Twain quote, this next one is one of his best. It’s one of the most famous quotes about procrastination on the list.

Put It Off To Tomorrow

Tomorrow is a theme that crops up frequently in funny procrastination quotes. Taking the first step of a fitness plan, starting instead of endlessly researching your novel, turning a good idea into a business venture…

Sometimes it’s fear of the unknown that stops us from acting. We self-sabotage ourselves by over-thinking because we’re afraid of success. It’s one of the common reasons for procrastination.

That may not make much sense, but your current situation is familiar, even if it’s not ideal. Procrastination stops you from succeeding but it also stops change.

Deep down you could be afraid of what might happen if all your dreams become a reality. So we put things off until tomorrow. We’re sabotaging our chance of success.

The Thief Of Time

Imagine how much time we’d have if we didn’t waste it on procrastination! All those minutes spent procrastinating add up to hours and even days.

We have limited time. Spend it focused on tasks and making decisions quickly. The thief of time is the subject of these procrastination quotes.

Procrastination can make even the easiest of tasks seem hard. Those uncompleted tasks are always there at the back of your mind preventing you from moving forward.

I love these procrastination sayings about the true value of time. Time spent procrastinating is time you can never claim back.

None of us have the luxury of endless time. The greatest amount of time spent on procrastination is time wasted on unimportant things. Lives filled with the regret of opportunities missed.

Loving life is about grasping opportunities and being brave enough to take the plunge. Not filling your life with regret because you were too afraid to chase your dreams. Learn from these procrastination quotes:

Motivational Quotes For Getting Started

Sometimes all it takes to get through difficult and complicated tasks is to take the first step. Don’t wait until you’re in the right mood.

If you want to get fitter but think it’s impossible, start by walking around the block. Afraid to start a home-learning course? Just try the first module.

Break down the complicated, almost impossible challenges into small units. The most important part of any activity is taking the first step.

We don’t just procrastinate about starting tasks, we also delay making important decisions. Failing to make a decision often has a far worse outcome than making the wrong decision.

Give your decisions appropriate attention, but always make a choice. We procrastinate because deep down we know the decision we’re expected to take is wrong.

Don’t let other people’s expectations cloud your judgment. It’s your life. Make sure you’re making the decisions that affect it. The choice has to be right for you.

Sometimes we’re just sweating the small stuff. Decisions that are unimportant such as what to wear to work today.

A Different View Of Procrastination

Sometimes we procrastinate because we know we’ve taken on too much. If overwork is the issue, take time to slow down. Be mindful of the things you do every day.

If your life is a constant stream of endless tasks with no let-up and time for self-care, you could be procrastinating for a good reason. Work on ways to reduce stress.

If you’re a dedicated procrastinator, at least revel in some humor.

If you’ve found this post helpful, you may enjoy my other healthy living-related articles: