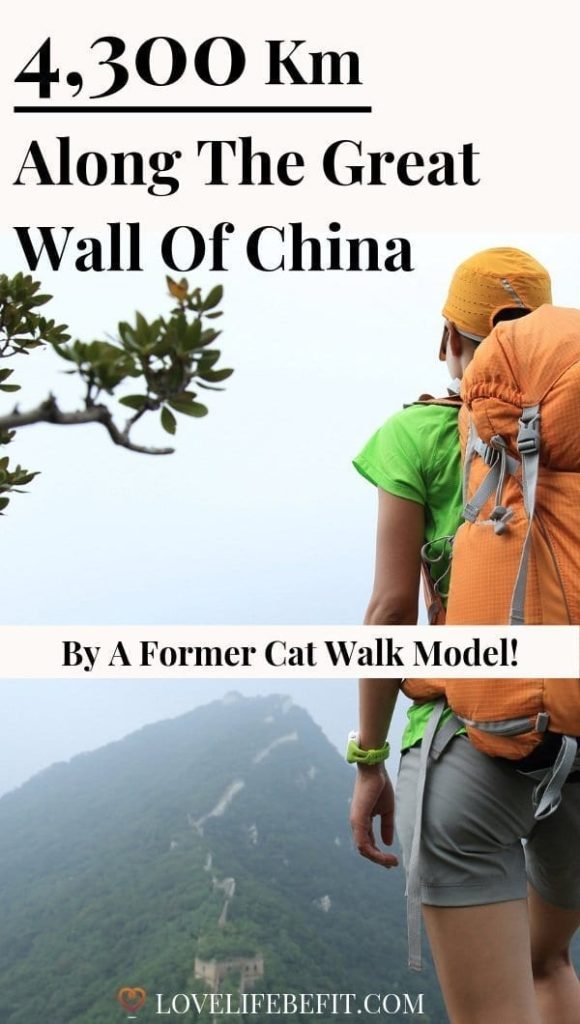 It’s quite a story really, a former model with very little walking experience, sets out to hike the entire length of the Great Wall of China.

Just to get the details right, the length of the Great Wall Of China is 21,196 km but that’s only if you add up all the individual sections. The actual length from the most westerly to the most easterly point is about 4,300 km. This is the distance Katie L’Herpiniere and her friend Tarka set out to conquer.

The Full Length Of The Great Wall Of China

Over the years there’s been quite a bit of interest in walking or running the full length of the wall. It’s a distance that’s hard to pin down.

Back in 1986, William Lindsay set off from the Western Part of the Wall, Gansu province at the JiaYuGuan Pass, and headed east. Sickness and the bureaucracy of China in the eighties, meant it would be two years before he completed the route. His route was 2,500 km in length, finishing at ShanHaiGuan pass in Hebei province. Lindsay met his future wife, spent 78 days running, and achieved the label of the first “foreigner” to run the Great Wall.

Braam Malherbe and David Grier ran 4,218 km along the wall in 2006, (finishing just after Katie and Tarka set off). They completed the route in an impressive 114 days, running an average of 43 km/day. Running back-to-back marathons, over difficult terrain, is hard to get your head around.

Katie and Tarka took a little longer, 167 days, nearly 6 months. But before you directly compare the times, take in this little nugget of information… L’Herpiniere and Tarka were totally unsupported. They were walking not running because they were carrying big heavy packs!

The Great Walk Of China is a must-watch video as Katie is transformed from a model to a hardened explorer. Along the way, she copes with extreme temperatures and really challenging terrain. Katie also ends up on an intravenous drip for 4 days after drinking contaminated water in the Gobi desert. It’s quite an adventure!

It took guts for Katie to get back on the trek. If you’ve ever carried a heavy pack for several days, you’ll understand what she’s going through. This walk is a long slog and you really feel for Katie at times.

This film isn’t just an adventure documentary by her husband Tarka (they married after the trip). It’s a wonderful insight into the unseen parts of China and the hospitality of the local people.

I loved The Great Walk Of China Video and can relate to how Katie felt carrying a big pack and walking for days in a remote country. Her achievement straight off the catwalk is nothing short of amazing. Love to hear your views…