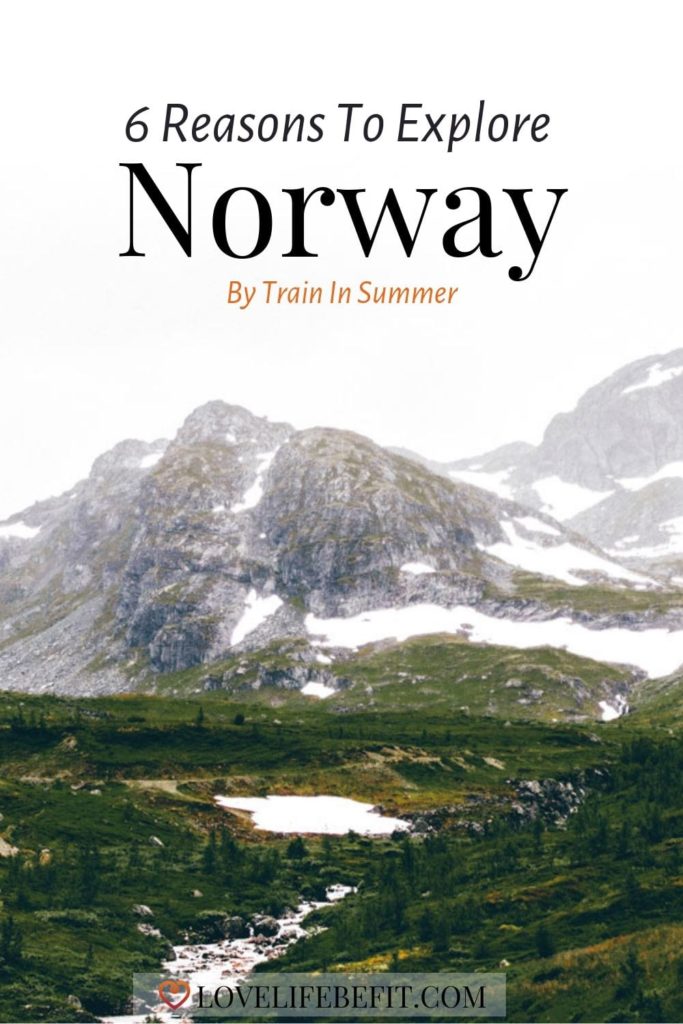 Norway is notorious for being an expensive place to visit but taking the train with a rail pass can be an affordable option. Read on for 6 must-do ideas to explore Norway and enjoy a little outdoor adventure!

The Bergensbanen, or Bergen Line, is the spectacular railway between Oslo and Bergen. It’s a real feat of engineering and takes in Finse Station at 1,222 m, the highest station on the Norwegian railway system. To be honest, it doesn’t feel particularly high, but this is still possibly Europe’s best train journey and not to be missed if you want to explore Norway.

Bergen on the coast is surrounded by mountains and fjords. Take a trip up Floyen Mountain to enjoy the best views and explore the mountain trails. You can hike up to the 399 m summit but if you’re on a rest day, save your legs by catching the funicular.

Stop off at Myrdal on the Bergensbanen and take the Flamsbana (Flam railway) down to Flam on the famous Naeroyfjord. Soak up the views of deep ravines and cascading waterfalls. It’s the steepest railway in Northern Europe dropping a whopping 865 m.

If you’re planning on wild camping, set off on foot from Myrdal and find somewhere in the upper part of the Flam valley. Wild camping near Flam itself is seriously frowned upon. Watch out for tent-eating goats!

This is the service road built for the construction of the Bergenline. It’s 80 km in length from Haugastol to Flam and is usually completed over two days with a night at Finse.

The season for cycling this route is really short – July to September. At other times the way is blocked by snow and even in summer expect to carry your bike over short snow patches.

You’ll need good brakes for the descent down to Flam. It’s okay to get off and walk the steepest section with its 21 hairpin turns!

Gaustatoppen (1,883 m) is the mountain overlooking Rjukan, a 3-hour train and bus ride from Oslo, and the setting of the “Heros of Telemark” film. This film classic is based on the true story of sabotaging the Norwegian heavy water supply during World War II.

The peak is the setting for the Viking challenge billed as “Norway’s toughest uphill run”, a 10 km race from Rjukan to Gaustatoppen. It’s a brutal 1500 m climb to the summit. If you’re a fast runner take note; there are some serious cash prizes for the winners.

Take The Train To The Arctic Circle

The Norwegian rail network extends as far as Bodo in the Arctic Circle. It’s a surreal experience camping out under the midnight sun. The locals seem to make up for the long winter days by staying up all night in summer.

There are endless peaks to explore. The easiest Keiservarden makes a good midnight walk – no head torch required!

It’s impossible to explore Norway in just one trip and I can guarantee you’ll want to return. Heading there this summer? I’d love to hear about your experiences…